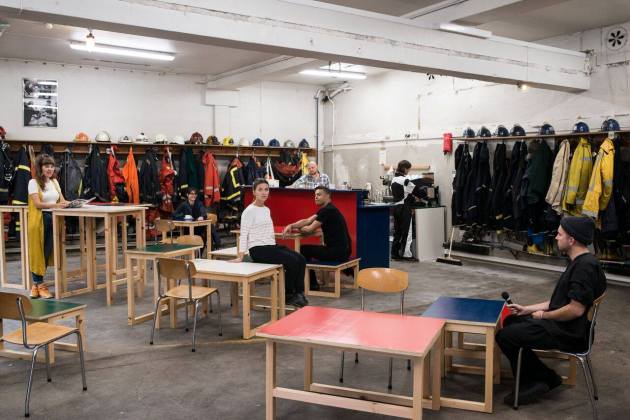 “We invite everyone to assemble and dance with the tables”

the Partisan café is an educational/performative/artistic practice as a coffee house in the Museum of Burning Questions – a Para-Museum realised in collaboration with the artist Isa Rosenberger – and one performative platform of the freethought infrastructure project at Bergen Assembly.

Located in the occupied historic fire station of Bergen the Partisan café is host as much as guest. It is a shared space and a contact zone. As educators and café workers we think about radical hospitality. As guests of the resident firefighters we think about reciprocities and commonalities.

the Partisan café borrows its name directly from “the Partisan coffee house” – a space for gatherings, conversation and debate in London Soho in the late 1950s, organised by the New Left. Our use of the name is not nostalgic but an actualisation: With burning questions of today, we relate to it and appropriate it.

the Partisan café is related to a choice: partisan instead of participant. As “participation” has become a main engine of neoliberal transformation, formulating and taking up dissident stances is necessary. Rather than interacting within prescribed situations, we choose to build situated knowledges and actions.

We consider our educational work – as much as our artistic, performative and/or curatorial actions – as an organic intellectual practice. We work actively against the unacceptable choice between either marginalisation or neoliberalisation of education in the cultural field. We practice our educational work differently.

(from the Partisan café post-manifesto)

“The café is run by seven educators/performers/café workers. Six of us are contracted to work 37.5 hours a week.”

This was my working suit for the whole time of the Partisan café Bergen in September 2016. Marking when my scedualed working hours started I put on the suit, taking it off when the shift was over.