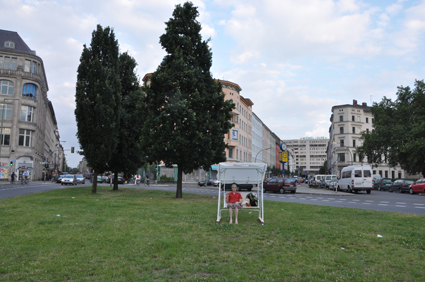 A Hollywoodschaukel (German) is a swinging, roofed and padded garden bench. In German this piece of furniture is named after the American movie city Hollywood.

In the 1960s and 70s the Austrian journalist Margret Dünser invited members of the international Jet-Set to the successful German TV show “V.I.P. – Schaukel” (V.I.P.- swing). She interviewed the celebrities in their private home and sometimes even in their own Hollywoodschaukel, which gave the show its name. Through this programme and its soon proverbial name an even more cosmopolitan flavour was associated with this simple piece of garden furniture.